Manon Woringer is an Electronics Fellow at the IDIN-supported Twende Innovation Center in Arusha, Tanzania. This blog is reposted from the Twende website.

STEAM (Science, Technology, Engineering, Arts, Mathematics) in the Tanzanian education system is really poor. Most schools don’t have resources to teach science in a meaningful way: basic electrical components and tools, computer labs, and practicals are rare in schools and in the curriculum. However, there’s an immense curiosity of the students for that and here at Twende, we believe that STEAM topics without hands-on activities don’t have the impact they should have on students, leaving many students missing out on many opportunities STEAM offers. 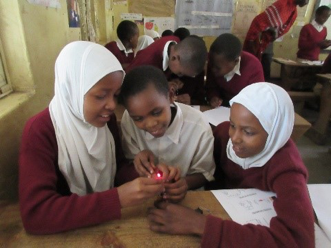 As an IDIN Innovation Center Partner, Twende offers Creative Capacity Building (CCB) trainings. This April, Twende delivered its first electronics CCB workshop. I joined Twende, and Chris Mushi, long-time instructor and innovator at Twende, and responsible of the electronics programming, early March, as an electronics fellow, to work on this new programme.

Last year, Twende conducted its first workshop introducing LEDs and basic circuitry to secondary school students aged 16 and 17. Twende’s electronics team goes to a school with basic components like LEDs, resistors, switches, potentiometers and 9V batteries and teaches very basic current and voltage knowledge as students make very simple electronics circuits. For most if not all schools, it is the first and only time students see components outside the books, and the way their eyes light up when they light up their first LED shows how useful these workshops are.

This year, the goal was to get deeper with the same students – in both electronics capacity and insight to the design-thinking philosophy. We decided to bring the students to Twende for a three-day workshop; no (school) teacher and an entire workshop with tools to encourage learning through making something useful. 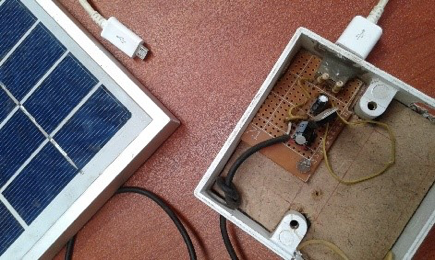 During the first session, students made a flashlight, designed by Chris, with a very basic circuit of LEDs, resistors, batteries, and a home-made switch. The housing of the flashlight, made out of basic water pipes and recycled plastic bottles, was also interesting to build, and students learn how to use some tools and how to make with available resources. Students learn how to solder (usually for the first time), make their own torches, and bring them home to use.

For the second session, the students learn more advanced electronics through the solar phone charger workshop, designed by Chris. This is a bit more difficult for everyone: the circuit is more advanced with regulators, capacitors, USB port connections, and solar panels, alongside being a bit trickier to solder. But it was extremely interesting to observe how the students tried hard to understand and make a good product with the motivation of building a real-life object useful to solve an everyday problem. Now students can say, “Let’s scoff at Tanesco [Tanzania’s national electricity provider] during the day-long power cuts with our solar phone chargers!”

The last session begins the time for the students to use their new skills, come up with their own ideas, and build them. The brainstorming is really exciting, seeing students understanding that electronics could be a tool for innovation and that innovation can solve their or their community’s problems. For our first set of workshops, we selected five ideas.

A group of very autonomous boys worked on a solar car. They wanted to solve energy problems and build a solar car – very ambitious! We challenged them to begin by making a car toy powered by a solar panel. They produced a fun home-made car, powered by a panel, mostly out of recycled materials, working well, though uncontrollable. We also had an electric bell to help the watchman of the school who has to ring the bell in every hall. With the electric bell, he would just have to switch a button. There was also an automatic window cleaning machine and a solar oven. 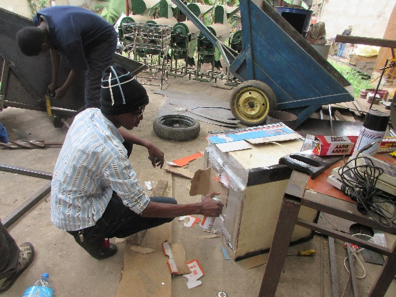 But our most driven student was definitely Benson. A passionate learner, who decided to build his own egg incubator instead of the imported ones, and who was absolutely determined to take his project to a high level with our help. He developed the case and the basic system on his own. Then, we worked together on the challenging problem of the temperature controller. It was a really interesting experience to learn with him about controllers, to go back to the basics of programming and coding of information in a computer, and to put him in a non teacher-to-student relation as both Chris and I didn’t know how to solve the problem either. Benson finally had space to express his creativity and willingness to learn, and I probably learned as much as he did (technically and non-technically).

This workshop was definitely a success and a great experience for the students who were extremely curious, willing to learn and creative. For Chris and I, it was a very rewarding experience as well. We identified some talents, willing to make their own thing, and who would continue attending Twende and tinkering at the workshop. 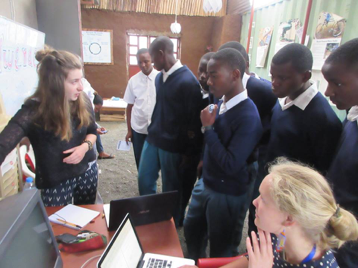 ICT Can Be Taught to Anyone, in a Hundred Different Ways

As a telecommunications engineer, my experience at Twende was a great opportunity to discover something different in a completely different context. I studied ICT in school and now I could see the direct impact of ICT on Tanzanians. At Twende, I saw how electronics and ICT generate so much interest and curiosity. How the eyes of our young students light up as soon as they light a LED, how new development tools (Arduino, Raspberry Pi) allow makers and beginners to be creative (projects about temperature controllers for egg incubator, remote-controlled greenhouse, and self-guided robots), and how adults are willing to learn and share their knowledge because they realise how useful electronics knowledge is. It was also very interesting to observe learning mechanisms around new technologies. I met very few people who had similar formal education to mine, so people were learning in a completely different way, and I constantly had to adapt to our differences of basic knowledge that we held. It was an eye opener to realize ICT can be taught to anyone, in hundreds of different ways. New tools allow people to learn by making, without always needing to understand the complex equations and concepts. This was not something that I was used to, but it allows people with all sorts of background to have more creativity and innovation. 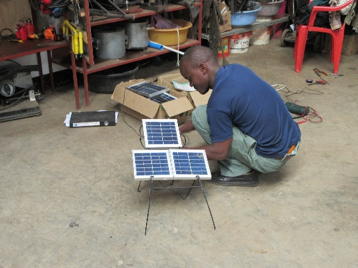 Twende is a thrilling space for innovators and innovation. It’s a place where you’re encouraged to make your own thing. A place that arouses creativity by gathering different people: mechanical engineers, welders, artisans, electricians, business people, farmers and inspiring people to inspire each other. A place where you learn user-oriented design and Creative Capacity Building. A place where everyone has a different path to innovation, where much more than the skills, what matters is creativity, determination, and understanding of your community. Just like innovators when they get here, I learned a lot through Twende, from all the inspiring innovators I met here, and it opened me up to these new ways of thinking.

The Most Inspiring Person I've Ever Worked With

As described above, I worked primarily with Chris during my mission. He is definitely the most inspiring person I’ve worked with. I had met Chris back in December when I visited Twende’s innovation space for the first time. As soon as we had been introduced to each other, Chris was very interested in my background studying telecommunications engineering and especially electronics, and he instantly showed me his solar phone charger and shared with me a couple of challenges he was facing at that time. From that moment, it was set that Chris and I would make great complementary partners, as Chris had the practical experience of building things, and I had the theoretical knowledge of electronics from the books. Chris has an interesting journey as a maker: he went for vocational training as a professional welder and industrial drawer, then he met Jim, Twende’s co-founder and became Twende’s first employee, working on technologies to solve the problems of the Tanzanians. He learnt Creative Capacity Building and became not only an artisan but also a designer. Later he became interested in electronics and decided to start learning by making things, regardless of his lack of prior knowledge of electronics, and now he is Twende’s official electronics CCB instructor. I’ve been impressed by his process of learning by making, his commitment to changing the Tanzanian society and his optimism and dreams. 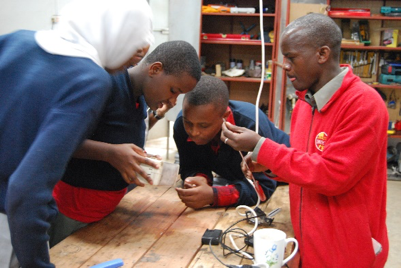 I learned from Chris how to find an electronics solution to a problem by making; while I would do calculations, launch a simulation, or look for a tutorial, Chris would just take a breadboard and go. One day I was reading ‘Instructables’ to design a new ‘Build It’ workshop and not able to come up with anything; Chris would just take a few components, a few materials that were lying around the workshop, and in one afternoon he had built a torch. I learnt from Chris about the Tanzanian society. His motivation to teach electronics is to raise the interest of the students while the school curriculum is poor and to give independence to anyone when they face simple electrical issues. He believes strongly that Tanzania needs makers and Tanzania made products to stop dependency to imports. I learned about Tanzania through his life as a father of two in a poor area of Arusha. The most amazing thing about Chris is that he is always friendly, happy, and full of optimism in his work. Chris wakes up every day wondering if he could come up with an innovation that would have potential in Tanzania, impact on the society, and change the course of his life. Chris (and now me) trusts young Tanzanians to become great innovators, innovation in the hands of everyone will start little but can definitely change the situation of so many Tanzanians. 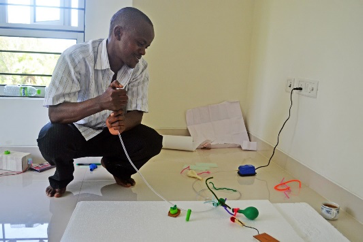 I wish I could stay longer at Twende. I’m very curious to see the future of the workshop and where Chris is going to take the electronics innovators of Arusha.

Chris and I are invited to Fablearn Conference at Stanford University on Creativity and Making in education; we submitted a paper on our work that got accepted. A great opportunity to present our work, share experience with educators, researchers and policy makers, represent Twende at an international conference, and bring new ideas back to Arusha. Because Chris’ income is not enough to cover the expenses of the travel and Twende’s budget cannot cover this, we’ve launched a crowdfunding campaign to send Chris to San Francisco. Donations welcome, sharing even more!